AirMedia allows people to share control of wall monitors and speakers using laptops, and to a limited extent, iOS and Android tablets and phones. (iOS and Android devices can send screen shots and share photos and documents, but not video, audio, or a continuously updated view of the display.) One user at a time can control the entire screen, or optionally, the screen can be split into four parts with content from up to four computers appearing in each quadrant.

If you have not already installed the AirMedia client software, the first step is to download the appropriate program/app for your device. The Windows and Mac links below let you download installation files to your computer; the iOS and Android links go to pages where you can download and install a free AirMedia app on your phone or tablet.

Specific installation instructions for each operating system appear below.

AirMedia installs like any other application. Simply answer "OK" / "Accept" to any prompts asking for permission. Once installed, the AirMedia shortcut looks like this:

Clicking on the link above will download a ZIP file that contains the AirMedia Mac OSX 3.1.3 client (the latest version as of July 9, 2018). Open it, and then double-click the "InstallAirMedia" icon (the first of the two files). This will install the AirMedia program, but will also display a message saying that "This program is not optimized for your Mac". Just ignore that message.

Once installed, AirMedia will appear as a black A icon on the docking menu.

(NOTE: Previous versions of the AirMedia client also installed a program called "SoundFlower" that enabled audio to be transmitted from the Mac to AirMedia. The current version now has built-in audio drivers and no longer installs SoundFlower.

AirMedia installs like any other app; however before using it to send screen shots to the monitor, you will need to go through a "Shot & Show" configuration setup. If you don't already know the combination of keys used to take a screen shot on your phone, you'll need to look that up before using Shot & Show (for Android phones, it can vary between different models of phone).

Depending on where you last used AirMedia, you may see the following popup right after starting it. If so, just click OK.

The username field will fill in automatically -- it just serves to identify your sessions on the monitor, and it does not matter if it matches your actual TCU network username.

Once connected, the AirMedia Console appears. Note that the connection code displays in the console. 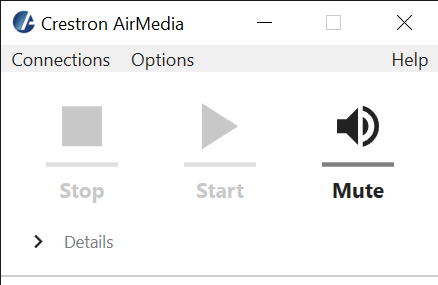 The side menu has several options, including an option to split the monitor screen into four quadrants and select which quadrant your content is displayed in. "Remote View" will cause the content that other users are displaying on the screen to appear on your laptop screen. The other options are not needed in study rooms and can be ignored. 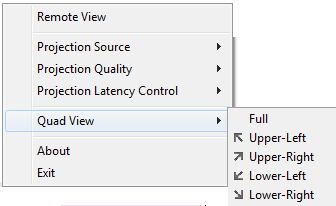 The AirMedia app for iOS and Mac devices will display a list of any rooms where you've connected before. If the room you're in is on the list, simply pick it. If not, use the "Tap to enter IP address" / "Tap to enter receiver hostname or IP" icon to bring up a screen where you enter the IP address and code of the room you're in. (On an Android phone, you may first need to tap the three vertical dots (circled in red below) to expand the bottom of the window.)

The IP address for each room is listed on on the top of the monitor (until the first person logs on) and a sign near the monitor. The connection code appears on top right of the monitor, and on the console of each person who connects.

Once your are connected, a menu appears that allows you to display documents, images from the camera folder, or screen shots that you take on the fly using "Shot & Shoot". 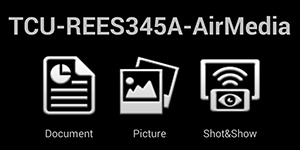 Examples off Document, Gallery/Picture, and Shot & Show views on an iOS phone/tablet: 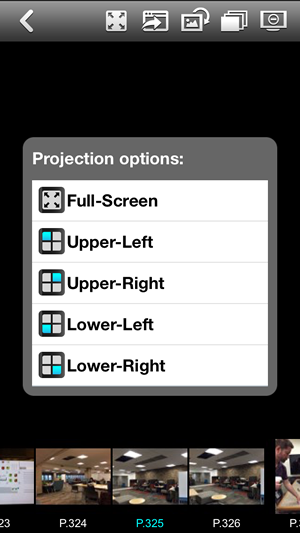 You can Ask a Librarian to contact a librarian via the phone, email, chat, text, or in person. Or you can submit a question using the form below. You will receive a response to your question as quickly as possible, usually within 24 hours (weekends and holidays excluded).